Redditch Mens 1st XI push for promotion from West Midlands Division 1 stuttered at the weekend after suffering a home defeat at the hands of Aldridge and Walsall 1st XI.

On paper, this was a game that the kingfisher’s would have expected to get points from after 5 victories in a row however, not for the first time this season, Redditch went behind after being caught in possession and the visitors counter attacking at pace, leaving the defence and goalkeeper Joe Cardy exposed.

Redditch tried to settle and get themselves back in to the game but too often they found themselves giving the ball away, struggling to get the ball to the forwards and therefore not creating many clear chances. Pete Dawson and Dan Jakeman’s shots which went wide of the post proving to be as close as the kingfishers went. However, they did go into half time level at 1-1 after a short corner strike was deflected off a defender into the path of Dan Jakeman who slid the ball across goal, underneath the goalkeeper and it was tapped in at close range from captain Adrian Young.

In the second half, Redditch struggled to get a grip on the game and with Aldridge & Walsall playing a very direct and pacey counter attacking style, the Kingfishers had to rely on good defending by Andy Billingham and some superb saves by goalkeeper Joe Cardy to keep them in the hunt.

Redditch had fewer clear cut chances than in any of the previous few weeks and went close through a short corner deflection by Andy Billingham which was well saved by the A&W goalkeeper with his helmet!! Both teams were becoming frustrated and it was the visitors who made the breakthrough with 10 minutes remaining to take a 2-1 lead and secure the 3 points.

This result leaves Redditch in 4th place with 2 difficult games before the Christmas break – away to local rivals Bromsgrove (3rd in the league) before league leaders and unbeaten Market Drayton at home on 1st December.

Attached is a team photo and also a photo from the short corner which Redditch scored. The ball is heading towards Dan Jakeman on the byline and Adrian Young is at the far post ready to scramble the ball home!! Third photo is Andy Billingham distributing the ball.

Redditch Mens 4s travelled to Edgbaston to meet a top of the table Bourneville side. The game started at a fast pace which both teams maintained until the final whistle. The home team scored fairly early on in the first half to take the lead but a Redditch short corner meant that Bourneville were soon on the receiving end themselves with a well taken goal by Alfie Wheeler. Play moved swiftly from end to end but penetrating attacks resulted in three more goals for the home side before the half ended.

The second half followed the same pattern as the first with a near miss from Simon Morris but resulted in a further four goals for Bourneville despite the occasional balletic footwork from young Barry Fitzpatick. Goalkeeper Aaron Hunt yet again ensured that the tally wasn’t higher. Despite the scoreline the team should be greatly encouraged by their unflagging workrate and willingness to contest every ball.

The home side ran out winners 8-1 fully justifying their top spot in the league table. 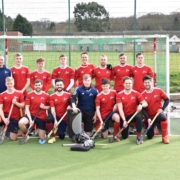 Kingfishers lay down an early marker